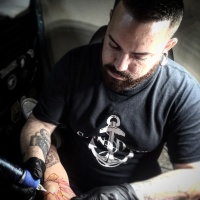 Although he had been a lover and practitioner of art throughout his life, it never occurred to Gerald Ramos that he might actually be successful in a career as a tattoo artist. It was while getting his first tattoo done by his friend that Ramos was encouraged by the artist to give tattooing a shot. The suggestion was further reaffirmed by Ramos’ own mom who told him to take advantage of his artistic prowess and try his hand at slinging ink. With the motivation needed to push forward, Ramos left behind his 9-to-5 as a customer service rep at a mobile phone company, and picked up a tattoo machine. Today, he is a highly skilled artist focusing on the realism style of tattoo, for which he is sought after by a long list of clientele around his homeland of Puerto Rico and beyond.

INK LATINO: What was it about tattooing that eventually made you listen to those around you and venture into a career as a tattoo artist?
Gerald Ramos: It was the opportunity to view art and stories on skins, and also challenge other styles and their applications. 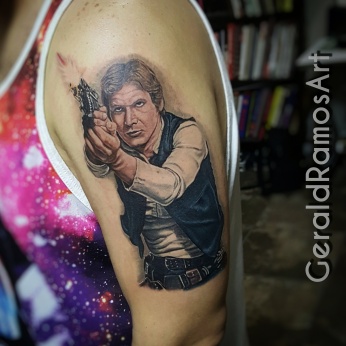 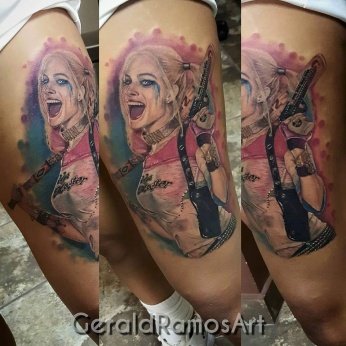 Were you working in other mediums before you became a tattoo artist?
I was as a musician. I’m still a musician. I played before in different types of music and different instruments like drums, bass and, recently, the guitar. The last band I played with was a Pop/Rock Spanish band called Audio Alterna. Now, I still play guitar and sing with a cover band, but just for fun.

We know that when you first began, you went the self-taught route like a lot of artists do, but later on, you were mentored by Mota Ortega. What were some of the things that you learned from Mota?
The basics: how to make better stencils, recognize the types of needles, inks, among other basic things.

Were there any other artists who helped you along the way?
Many companion artists have and still continue helping in my learning. There is always the exchange of knowledge, and between us artists, we help each other on occasions and/or give suggestions. Also, when taking seminars. There is also a great artist and friend that has turned into a mentor, Johan Avila, who from a few years until the present, has always helped me either via text or when we meet at conventions, where he also gives me suggestions while evaluating the tattoos done by me, and sharing things that would be effective for my artwork. 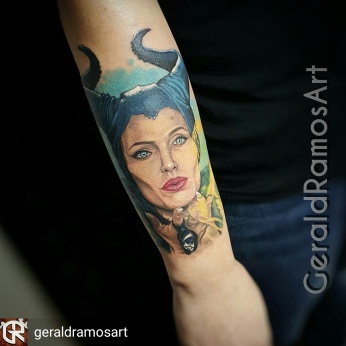 Has the tattoo scene changed in Puerto Rico since you began six years ago?
About six years ago, it was still a bit taboo, and tattoos were not so common—or at least they were not visible. But presently, it has become as common as the tattoo guild in the United States. Also, the styles have evolved and new tendencies have come out during these years thanks to social networks, conventions, etc.

From the looks of your portfolio, it’s safe to say that your preferred style of tattooing is realism. Can you tell us a bit about how you came upon this style of tattooing, and what was it about realism that made you decide to focus on it?
I admired tattoo artists before tattooing. My favorites were artists such as Mike Devries and Nikko Hurtado. When I began tattooing, my favorite artists from the island were Mota Ortega and Bengie Archilla, whom have been mentors and colleagues of mine, like many other tattoo artists in Puerto Rico. As a child, when drawing, I enjoyed drawing pictures by trying to copy in the drawing what I saw in photos, so realism became something that caught my attention—and with which I have accomplished many opportunities within that style. Even though there are other styles that cause passion in me, like subrealism and neo traditional, among others.

If you had to choose, what other style of tattooing would you like to take on next?
One style that I have actually tried to work is neo traditional. One of the things that I have learned profoundly during these six years is not staying in my comfort zone, and on occasions experimenting with other styles. 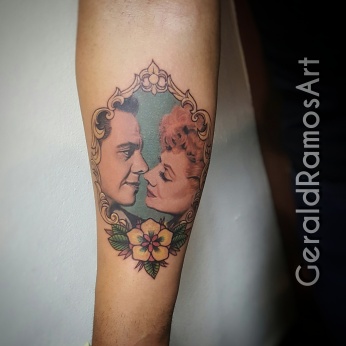 Portraits add a bit of tension to tattooing due to the high level of accuracy that is expected when doing them. Do you feel any added pressure when doing a portrait tattoo? And if so, how do you manage it?
I believe my concern at the beginning was when I tried, because as the question says, the precision and being as exact as possible is the key to faces. But, even if I’m under pressure, the experience and that fact that I enjoy tattooing portraits help me feel much more at ease when elaborating on them. Even then, it’s a constant process of learning, because each experience is always a new one, and each require the same or even more precision.

Realism is one of the most popular styles of tattooing. What do you do to try to stand out from all of the other realism artists in the industry?
It’s not so much about standing out from any artists. Each and everyone of them have their own style and passion for tattooing. I only try to stand out from myself and my artwork, and try to be better every day. I also believe that it has to do with having many clients that trust their skins with my realism.

What goes into the typical preparation for one of your pieces?
I speak to the client ahead, so I can have an idea of the artwork, but at the moment of the appointment, while I prepare my workspace, I’m also speaking of that idea with the client, whether it’s an original art or one taken from the internet. No matter how it’s presented, I always focus on customizing the artwork with the goal that the client gets something original.

What inspires your artwork?
My daughter, and the happiness or satisfaction the clients show when I finalize their artwork.

Can you offer some advice for someone looking to get a tattoo?
You should do a good search of artists…that’s the key. And, depending on the artwork you want, when searching for the right artist, be sure he or she dominates what you’re looking to have made. Always remembering that a tattoo is a luxury, and it’s better to save your money for the pleasure of getting tattooed what you desire, than just tattooing yourself for the sake of tattooing yourself.

What advice do you have for any aspiring artists out there who are thinking of venturing into the tattoo industry?
Find an artist with vast experience, so you can learn from his or her advices. Also, practice in various mediums of art, take seminars, and always be willing to learn.

What shop are you currently working from, and where is it located?
Presently, the major part of the time I share with the team at Taller Ausubo located in Caguas, Puerto Rico. And, on occasions, I visit other shops in and outside of Puerto Rico, as a guest.

Will you be attending any conventions or do any shop guest spots either in Puerto Rico or outside of the island in 2017? If so, where can our readers find you?
Confirmed: in January I’ll be visiting the city of Orlando, Fla. as a guest at Scratch The Surface; in March I’ll be participating at Inksane Puerto Rico convention, at Viva La Tinta in Rio Negro, Colombia, and at InkedUp in Panama in April. Unconfirmed: there are plans for New York and again Colombia, among others this upcoming year.