It seems like tattooing was the destined career path for José Contreras. Captivated by the arts at an early age, Contreras had always been interested in illustration and learning the skills required for the occupation. However, this was years before he would invest in his interest—long before tattooing was even a blip on the radar for him.

Contreras entered the body arts industry in 2006. One would think that being that he was interested in drawing that naturally he’d jump right into tattooing, but instead, Contreras chose to become a piercer after he was taught the basics by a couple of his panas. As destiny would have it, only a year into piercing tattooing would catch his eye.

“I remember seeing people on the streets with tattoos and I asked myself, ‘How is it possible to capture pictures on the skin?’” Contreras recalls. 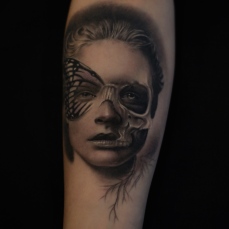 Contreras dove into the ink through a formal apprenticeship at a local shop in his native Caracas, Venezuela, learning the tricks of the trade from skilled artists such as Danny Da Silva, Yoset Perez, Yomico Moreno and Darwin Enriquez among many others along the way.

With help from his colleagues and mentors, he continued learning the craft, and gradually began to acquire more confidence and knowledge. And his hopes to one day learn how to draw came full circle through tattooing as well when he began taking illustration courses to better equip himself for his career as a tattoo artist. Through the courses he learned how to work with different techniques and mediums such as oil, acrylics, pastels, airbrush and, his favorite, watercolors, which all helped him with applying colors and combinations and accomplishing the smoothness on skin that he was able to achieve on aquarelles Contreras told us. 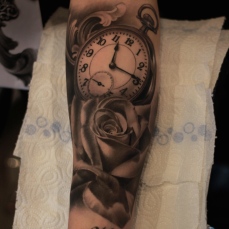 After only seven months into tattooing, he attended his very first tattoo convention, where he won first place in the category of Best Newcomer. Since then, he continued participating in other conventions at national and international levels.

Word about the new slinger in the tinta game spread across South America, eventually landing Contreras an invitation to guest spot at a studio in Buenos Aires, Argentina, and a year later, he was invited to work in a shop in Lyon, France. After working in France for a few months, he set off to work across most of Europe guest-spotting at many different shops. Eventually, the nomadic tattooer found a home in Cheltenham, UK, slinging his ink at No Regrets Tattoo Studio, which is where he is stationed currently. 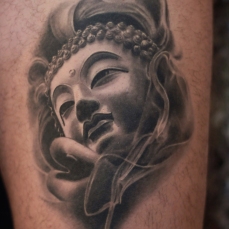 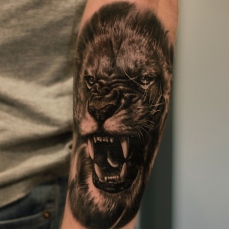 The majority of Contreras’ portfolio consists of realism work—both color and black and grey. He is known for creating remarkable pieces that seem to come to life on his clients’ skins. Despite having an impressive realism body of work, Contreras says that he continues seeking for his own identifiable style. He is also currently working on adding neo-traditional to his portfolio, and has already put together some colorful, awe-inspiring pieces.

“The neo-traditional style is something I have been exploring. I started not too long ago to study and practice this style, as I would like to fuse it with the realism in the future. I think this curiosity is due to my willingness to always learn new styles and not limit myself with only one,” Contreras said of his new artistic goal.

Within the last eight years, José Contreras has built up a sick portfolio and a long list of clientele that stretches across the globe. From winning awards early on in his career to being sought out for guest spots by shops around the world, he has definitely found the path he was destined to travel. To think, it all began simply out of pure curiosity.

To check out more of José’s work, hit the following links:

One thought on “José Contreras: From Caracas To Cheltenham”